Deputy ANDY (Ty Olsson), (at one point briefly Sheriff ANDY), was General Mansfield's hand-picked robotic replacement for Jack Carter following the Eva Thorne incident. Since the time-altering event at the beginning of Season 4, ANDY has taken over from Jo Lupo as deputy to Carter, while she serves as Head of GD Security, and he has been redesigned and now has a completely different look as ANDY 2.0 (Kavan Smith).

Shortly after Carter, Lupo, Allison, Henry, Fargo and Trevor Grant returned to the present, altered timeline, ANDY sacrificed himself to draw positronic lightning away from Carter and Dr. Grant long enough for them to shut down a rogue experiment. Fargo rebuilt ANDY, among other things wiping his memory, upgrading several components and redesigning his face at the same time.

Deputy ANDY was given an "emotional upgrade" by SARAH. GD ordered Zane to remove the upgrade, but he left it installed so he could "have a friend in Law Enforcement." This upgrade initially caused ANDY to express affection for Jo in a naive and inappropriate way. After SARAH revealed what she'd done to ANDY, he told her it was the first romantic thing anyone had ever done for him. They spent the following night together.

ANDY and SARAH were engaged to be married but each suffered a severe case of "cold feet" on the day of the wedding ("Liftoff").

ANDY spends a lot of time with SARAH, and at first Carter wasn't comfortable with it, but after Holly was brought into SARAH and Fargo began spending all his time in SARAH as well, he began to respect and enjoy the company. At this time, the people who resided/stayed in SARAH were Carter, Kevin, Jenna, Allison, Jo, Fargo, the projection of Holly, and ANDY.

In the episode "One Small Step", ANDY is teleported to Titan by accident while saving Jack Carter from the same fate. While he was stuck, SARAH was being melted by Taggart's bats and her last words before shutting down were, "Tell Deputy ANDY I love him." This reveals that she has fully rekindled her love and relationship with ANDY after cancelling the wedding.

At the beginning of the fifth season he seems to have turned into a cruel director of Global Dynamics, but it turns out that this is just a program that the Astraeus crew was trapped in by Beverly Barlowe and Senator Wen. 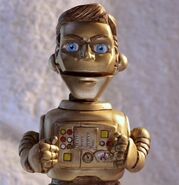