Allison Carter (née Blake) was a Department of Defense agent working as a government liaison between Eureka and the Pentagon. In the episode "Invincible", it was revealed that she was once a medical doctor and has 2 PhDs (Season 3, Episode 3 Best in Faux ). She oversees the main laboratories of Eureka, and is always present when anything goes wrong. She always has some sort of trouble to bring to Jack Carter, be it professional or otherwise. Since she is responsible for reporting on the progress of Eureka's citizens, as well as their temperamental innovations, she is always at the forefront of any dilemma that might arise. She was Director of Operations for Global Dynamics after Nathan Stark.

She is not happy when her estranged second husband, Nathan Stark, returns to Eureka as Global Dynamics' head researcher. He has not yet granted her a divorce. Throughout season 2, Allison and Nathan's relationship grows, and eventually results in Nathan proposing to Allison and she accepts. Allison has an autistic son, Kevin, from her first marriage, which left her a widow. According to the Season 3 premiere, she is 37 years old.

In "I Do Over" (Season 3, Episode 4) her and Nathan Stark's wedding is to get underway but since Stark helps Jack repair a hole in the Space Time Continuum, which requires him to manually adjust a nuclear clock to repair space-time; Stark is apparently killed and her wedding is called off.

Since The Events following the Time Bridge and The Astraeus Mission, Jack and Allison's relationship began to become more romantic and eventually ending in him proposing to her using a curly fry in the newly rebuilt Café Diem.

In "In Too Deep," Jack and Allison have an impromptu wedding officiated by Henry Deacon over a telecom link as they are about to drown. Due to their marriage, Zoe has become Allison's step-daughter, Lexi Carter has become her sister-in-law, and Lexi's twin boys have become her nephews.

Of her genetic family, only her brother, Dr. Marcus Blake, is seen ("One Small Step..."), played by Salli's real-life husband, Dondre Whitfield.

In the series finale, "Just Another Day," Allison reveals that she is pregnant with Jack's child, just as she was in "Once in a Lifetime." Neither the sex nor the name of Allison and Jack's child is ever revealed. But with this addition to the family, it gives Allison a total of four children: three biological children and one step-child. 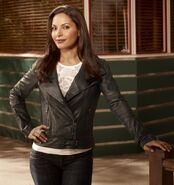