Douglas Fargo — usually referred to as simply "Fargo", occasionally "Doctor Fargo" and "Doug" to Claudia Donovan — is a resident of Eureka, OR, an employee of Global Dynamics, the research facility in Eureka. Fargo often acts as an assistant to Doctor Nathan Stark, the director of Global Dynamics. Fargo has been connected to several separate development projects, including SARAH (Self Actuated Residential Automated Habitat) and the "Neural Interface System".

In the new timeline, Fargo finds himself to be the director of Global Dynamics. His other self seemed to be a much meaner and power hungry person, as he would be raised differently since it was hinted that Pierre Fargo was never put into cryostasis and because of that the Fargos were a much more powerful family and a line of them had been the directors of Global Dynamics. (Because of this, Nathan Stark might have never came back to Eureka, as when he first came to be director it is discussed that he left for a reason that was not revealed. For this reason Nathan Stark might still be alive but working elsewhere)

Despite being the head of Global Dynamics after the timeline was altered in Season 4, Douglas Fargo was drafted to personally go to Warehouse 13 and upgrade their 8 bit GUI and operating system into a System-7 standard OS as well as delivering a series of automated maintenance units to run in conjunction with the new computer system. Despite assurances that nothing would go wrong in the upgrade, Fargo inadvertently activated a failsafe mechanism - a first generation hologram that was run by part of the mind of the original Warehouse 13 computer administrator. Fargo, Artie and Claudia later managed to restore control by recombining the computer with the real programmer who had been reduced to a vegetable. Not, however, before the computer assessed Fargo as a security threat, by breaking into Global Dynamics personnel records and claiming that Fargo had 38 reports against his name, describing the problem as "Inappropriately pushed button". Fargo later brought Claudia Donovan to Eureka to collect new equipment for the warehouse from Global Dynamics, and later drafted her to assist in stopping a "timeline convergence event" in the town.

At a later date, it was revealed that in Palo Alto, California, Fargo started a business venture outside of Global Dynamics with two friends, Jerry and Gibson. They went to work on an elaborate virtual reality video game which Fargo marketed as FARGAMES, with a piece called the BRAID (Bioelectric Reality Augmentation Interactive Device). However, the human brain would not accept the synthetic reality, so Fargo managed to get his hands on an artifact, Beatrix Potter's Teaset, which opened up the creative part of the brain. What he did not know was that Potter's first editions of her stories had been very dark and when combined with the virtual game, the teaset manifested the player's darkest fears into the game. Fargo's fear was drowning which he'd had since childhood, so he got trapped in quicksand. Once his fear took hold of him, he began to have seizures and his heart rate would spike, leading Gibson to call the emergency contact Fargo had given him, who was Claudia. In order to finally finish the game, Fargo had to help Claudia, Pete, and Myka to get Jerry to conquer his fear of commitment to his ex-girlfriend, Hannah.

Many residents of Eureka look down on Fargo as either less intelligent than the other scientists or simply inept at his job, although his scientific ability has yet to be shown to be sub-par for Eureka. Fargo has a crush on Deputy Jo Lupo; although initially disinterested, she later seems to care for him to at least some degree (Noche de Suenos).

His social skills and practical intelligence may be less than ideal, including stereotypical fanboy behavior (Many Happy Returns) and accidentally saying thoughts out loud that would better be kept private (H.O.U.S.E. Rules). He also is an avid fan of Sarah Michelle Gellar, having a doll of her (as shown in "Right as Raynes" when Carter threatened to get it out of his desk and show it to the people he was currently in a meeting with in place of Nathan Stark) and wanted to use her voice for S.A.R.A.H. when he helped to create it - though he eventually resorted to using his own voice, with a high pitch and inflection intended to imitate a woman.

In Family Reunion Fargo discovers his grandfather was cryogenically frozen in 1957 and is thawed out into the present. As he helps his grandfather get used to the world, Fargo discovers that it was his grandfather who discovered research and techniques that were the basis for Eureka but they were stolen by a rival. His grandfather proves the various scientific theories were his with several things (such as the cryogenic chamber) renamed in his honor. Fargo is thus given more confidence that he comes from an illustrious line and hopes to match those achievements. However, in Glimpse, during season four's changed timeline, it is revealed that Fargo became Head of Global Dynamics because of his family's legacy, specifically, his grandfather, Dr. Pierre Fargo. Thus, it is implied that in the changed timeline, Pierre was never cryogenically frozen in 1957 and instead was given due credit for his work which made him famous and by extension, made the Fargo name and family equally as famous, which caused the Douglas Fargo of the changed timeline to be raised very differently than his counterpart, so he grew up privileged and ruthless, leading him to the highest seat of power at Global Dynamics.

In the original timeline, Fargo had a romantic relationship with a fellow Eureka scientist, who had to temporarily steal the identity of Jo Lupo (whom Fargo was crushing on at the time) to try and win his affections. This caused him to finally notice her, and they started dating. After the events of Founder's Day, he notes that in the new timeline, they had never been in a relationship. The two's relationship had become sexual before that, as they were found 'seizing the day' in the nude after the confirmation of the existence of Nemesis in What Goes Around, Comes Around.

In the three crossover episodes between Eureka and Warehouse 13, Fargo expressed romantic interest in Claudia Donovan. Disappointed to discover, after he met her at Warehouse 13, that she already had a boyfriend, he was quite eager to jump on the opportunity after Claudia arrived at Eureka, bearing the news to Fargo that she was single again. Although Claudia eventually left Eureka, telling Fargo that she couldn't stay because her home was back at The Warehouse, Fargo continued to be very attracted to Claudia and used her likeness (though, with larger breasts) to create the Princess that had to be saved in order to win in a virtual reality video game he created, based on The Warehouse, called Fortress 13.

Fargo has been saved by Sheriff Carter on numerous occasions, usually from problems he got himself into.

In the build-up to and aftermath of the Astraeus project, Fargo gets deeply involved with Dr. Holly Marten.

- Advanced Software Programming, emphasis on A.I. (Programmed the Smart House "S.A.R.A.H.," created an A.I. for his car which had a jealous personality, he has repaired Deputy Andy on several occasions, and he designed much of the programming for his virtual reality game Fortress 13)

- Robotics (Helped design and has repaired Deputy Andy on numerous occasions, as well as S.A.R.A.H and other robots)

Everyone in Fargo's family is named after a town in either North Dakota or South Dakota: 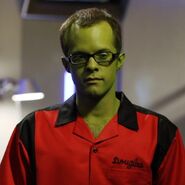 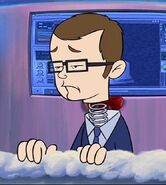 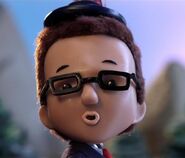 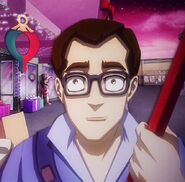