Henry Deacon is a master of all trades, who appears at the beginning to be a jack himself. He is not a scientist nor he is of any official capacity for the Company. Despite this, he is highly educated in the inner workings of the company. He acts more or less as a caretaker of the entire town, a situation formalized in Season 3 when he becomes Mayor Deacon. Then in season 4 after his trip to 1947, he finds out he is married to Grace Monroe.

He is first introduced as simply the local repairman, but it turns out he doesn't really work on cars very often. A little after Jack first meets him, Henry mentions he is an engineer. When Jack inquires about this, thinking he was a train engineer, he says that he used to be an engineer in rockets. The classic formula to solve a problem in Eureka is that Jack Carter makes some suggestion, Henry translates it into a technical solution, and sends Jack out to save the day.

At the end of the episode "Purple Haze", he reveals that everyone feeds off of him and he decided to leave Eureka. This causes conflict, especially between him and Nathan Stark, which shows up in the next episode "H.O.U.S.E. Rules". However, in the end he decides to stay in Eureka.

In the episode "H.O.U.S.E Rules" it is revealed that he was once a mentor and teacher of Nathan Stark. He claims that Nathan "Could have furthered science, in so many ways." He is also upset that instead of using his knowledge to further science, he chose "The corporate shuffle." Nathan than says he uses it to protect Henry's ways of working, because he didn't work well within the system. Henry is still upset about it, however. It was hinted that Nathan Stark brought Henry to Eureka, and when he says "I didn't ask to be brought here." it is also implied that it was against his wishes to come to Eureka.

In the Season 2 finale Henry is jailed for faking a biological emergency, so he could attempt to remove the Artifact from Kevin Blake, which ends up working. In the episode What About Bob? Henry Deacon is pardoned for his work in saving the inhabitants of lab 27.

Besides being a physicist and the auto mechanic of Eureka, Henry is also the town coroner and was elected mayor by write-in ballots. One wonders how Eureka failed to fall apart while he was in jail. One of his only weaknesses is that he has asthma.

In his return to the future after the events in Founder's Day, he found himself married to Grace Deacon, a woman he previously only knew in passing. Though there is tension in the relationship, as Henry doesn't reveal what happened to him at first, he eventually falls in love with her. With the help of Douglas Fargo, he takes her out on a date that he didn't previously, and wins her over, and they were later remarried.

In Ship Happens, it's revealed that Henry and Kim Anderson were working for G.D. 20 years prior on the Columbus project. The ship was lost 3 years after launch and the project was scrapped. 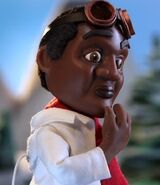 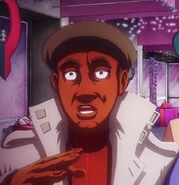