Jack Carter is assigned out of the office of the U.S. Marshals Service, and is currently the Sheriff of Eureka. Unlike most towns, in the town of Eureka the Sheriff is not an elected post.

Jack is a street-smart cop who sees connections where others can't. His I.Q. is 111, 46 points lower than that of his daughter Zoe. In typical Carter fashion, he originally was boasting that he "scored over one hundred percent" without even trying. It wasn't until after he looked up what the numbers indicated that he discovered his I.Q. was actually considered average. However, an I.Q. of 111 actually falls in the slightly above-average standing. Jack's real I.Q. is more than likely even higher, considering his contributions and ideas in most episodes. His high school GPA was also revealed to be a 2.8, or C average. He tends to focus on his career to the detriment of everything else, which led to the divorce between him and his wife, Abby Carter. Jack's unorthodox (for Eureka) style and manner has led to some friction with Deputy Jo Lupo, although the two share a deep unspoken respect for each other.

As demonstrated in "Many Happy Returns," Jack enjoys baseball, as S.A.R.A.H., his new house's "personality", reveals as she is dispensing beer for him. Another reference to his love of sports is given when S.A.R.A.H. explains her ability to call up many magazines, and the first couple of which are sports magazines. S.A.R.A.H. also concerned about Jack's health In "Blink", he attempts to recruit a baseball team, much to his later dismay as he learns they play Virtual Baseball.

Jack and his daughter Zoe stumbled upon the town of Eureka just as Walter Perkins was conducting his tachyon experiment. ("Pilot") When the previous sheriff was crippled as a result of this, Jack was promoted.

Throughout the series, his uncanny ability to connect what others do not see has helped him save the world over and over. He explains to Allison in "H.O.U.S.E. Rules" that the reason why he does what he does, why he chose his job, was to make a difference. And sometimes he feels he can't do that in Eureka.

In the first-season finale, it is revealed that by the year 2010 Jack and Allison Blake are married, and she is expecting his child. However, when Jack learns of Henry Deacon's meddling in time, he is forced to travel back to 2006 to prevent it. After this Jack had detailed knowledge of the next four years . ("Once in a Lifetime") Jack lost his alternate memories after Henry uses a specific long term memory device to erase the knowledge ("Phoenix Rising"). Jack has displayed some latent knowledge of what happened, as he displayed an interest in a book that was important to him in the alternate timeline, and he had a flash of memory during a dream but dismissed it. However, it is still unclear at this point how much he may remember.

In the episode "Family Reunion" it is revealed he was teaching his high school sweetheart, Angela Fairfield, to drive. They were involved in an accident, which killed her. The police assumed Carter was driving and he was charged with reckless endangerment. (This is referred to in the pilot when Carter first goes to Global Dynamics: at the bottom of his identity scan readout, there is a note of a class 1 misdemeanor.)

Jack is divorced from his wife Abby even though he continues to wear his wedding ring. At the end of "Primal", Carter removes his wedding ring, an indication that he is finally ready to move on from his failed marriage. However, in the episode "Purple Haze", he is once again wearing his wedding band. This is most likely due to the fact that "Purple Haze" was originally intended to air before " Primal".

His teenage daughter, Zoe Carter, has used brushes with the law in order to get his attention. (In fact, it is one of these brushes that brings Jack to Eureka.) Recently, Zoe has moved in with him and SARAH after running away from her mother. While the two do joke around a lot, his deep and protective love for his daughter Zoe is proven on many occasions. The most risky being when he took a prized World Series baseball bat to a small nuclear core in order to disable it and prevent a weapon from killing her.

In "I Do Over" it is revealed that Jack has a sister named Lexi Carter who lives with him and Zoe in Eureka for a while. He also has twin nephews via Lexi.

In "In Too Deep," Jack and Allison have an impromptu wedding officiated by Henry Deacon over a telecom link as they are about to drown. Due to their marriage, Kevin and Jenna have now become Jack's step-children.

In the series finale, "Just Another Day," Allison reveals that she is pregnant with Jack's baby, just as she was in "Once in a Lifetime." The sex nor name of Allison and Jack's child is never revealed. But with this addition to the family, it gives Jack a total of four children: two biological children and two step-children.

In "Many Happy Returns", Jack begins living in a "Super-House" named S.A.R.A.H. (Self Actuated Residential Automated Habitat), located in an old fallout shelter. SARAH was designed by local scientist Dr. Fargo on top of an older AI, B.R.A.D. As is the case with everything in Eureka, S.A.R.A.H. has a few quirks. One evening, she locked Jack out because he was late for dinner without calling ahead. In "Purple Haze", Jack and his daughter Zoe are unaffected by the pollen as S.A.R.A.H. regulates their air supply. In "H.O.U.S.E. Rules", S.A.R.A.H. determines that, with Henry leaving town and Jack debating on leaving, the entire town was in danger, leading her to lock several key Eureka citizens (and one pizza boy) inside. After that situation was resolved, Jack then had a skylight installed that had a manual escape hatch. 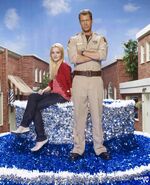 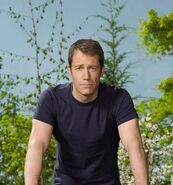 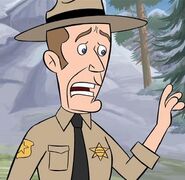 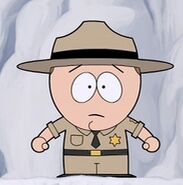 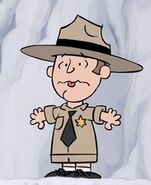 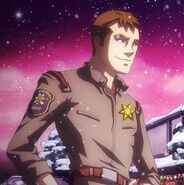