Jo worked as a Deputy Sheriff in Eureka under Sheriff Cobb and Sheriff Carter but temporarily resigned when the AI Andy, the android, was appointed sheriff. During her time as deputy, she always had a weapon with her, and went armed even in situations where weaponry is unnecessary. She also traveled almost everywhere in body armor. She 5'7",

In season four, after a space-time bridge sent her and four other people to 1947, they returned to the present to find many things had changed. Amongst the changes was that Lupo had taken a job as the head of security for Global Dynamics, instead of remaining a deputy. ("A New World")

She has a love of weapons, and has a varied and powerful collection stored in the station, both high tech and regular weapons which include several handguns, shotguns, sniper rifles, and assault rifles. She is also unusually strong for her size as she can manhandle Jack Carter with ease. The residents of the town and their odd experiments try her patience, but those few moments where she gets to shoot something seem to make it worth it. The residents themselves know and trust Jo deeply, as she has always been fair and follows the law.

In the beginning, her personal life left something to be desired. When she was not caring for her weapons, Jo was often seen scanning ads in magazines like Modern Mercenary for possible suitors. In the first season episode "Alienated", when the victims of the mind-altering signal are being shown individually psychologically tailored "calming" images to help them recover, a teary-eyed Jo's screen shows members of the armed forces during an amphibious assault.

According to the season three premiere, she lives at 60 Fermi Drive.

According to the SyFy channel's official website, Jo is a New Jersey girl.

In Noche de Suenos Jo reveals to Carter that she wanted to be a ballerina dancer when she was a young girl. Also in "Noche de Suenos," Jo states that she grew up with no mother and three brothers, implying that her mother died or left when she was young. However, she was old enough to remember the costumes her mother made for her for various roles in school plays. Due to her experiences growing up in a presumably all-male household, Jo claims she had to "learn to survive" and abandoned her ambitions to become a dancer.

In the Eureka novel, "Substitution Method", it was revealed that one of Jo's favorite TV shows as a child was "The Dukes of Hazzard." She loved their action sequences so much she was inspired to learn how to jump through the driver's side window of a car, among other car racing moves.

Up until season three, Jo was single, though she has made no comment about the fact. Despite initial antagonism, she is friendly with Zoe Carter, daughter of former Marshal and current Sheriff Jack Carter. Though she initially resents Carter for being assigned to the sheriff's post over her head, she eventually comes to have a playfully antagonistic friendship and working partnership with him, somewhat akin to a brother/sister dynamic. She is visibly touched by his get-well gift of ballet shoes in "Noche de Suenos", and throughout they are shown to have a fairly close friendship. Their relationship began to thaw in "Alienated" when Carter tells Jo, "You're my partner." and Jo coaches Carter for his weapons test.

In the pilot, Jo is first seen circling ads from an Unhappy Policeman and a War Historian in a lonely hearts column.

She had a romantic relationship with Callister Raynes, who was in fact a robot created by Stark. ("Right as Raynes").

Jo also appears to be quite fond of Jim Taggart, Eureka's "biological containment specialist" (Primal). This relationship developed to the point where they started a romantic relationship ("House Rules") which lasted until 2010 ("Once In A Lifetime"). However, that timeline was erased in Phoenix Rising, and in the new timeline, Jo demonstrates regret over making out with him. She seems sickened when Zoe reminds her that Jo and Taggart's age difference is the same as Zoe's and her dad.

Global Dynamics employee Douglas Fargo has demonstrated multiple times that he has a crush on her, to which she has responded with disinterest. She is appalled to discover in "Noche de Suenos" that she has had a romantic, Zorro-themed dream about him, but is notably appreciative of his request to stay with her when she temporarily loses the use of her legs later in the same episode.

In the season 2 episode 10 "God Is In The Details", Jo goes on a Sunday brunch date with Zane Donovan (who first appeared in "E=MC...?"). This seems to become a budding romance, though some problems arise later ("Maneater").

In Season 3 ("Your Face or Mine") her identity is stolen by a scientist at GD who is jealous of her (most specifically, of the attraction Fargo holds for her). This episode leads Jo to recount some of her favourite things about Zane: "Our first date: Sunday brunch at Cafe Diem. You brought a rose, I wore a sundress..."

Zane proposes to Jo early in Season 4 ("Founder's Day"), but she doesn't answer him. Later in the episode, she enters an alternate reality in which her relationship with Zane never occurred. This leads her to realize that she should have replied "Yes" to Zane's proposal, even though it would make no difference to her current situation. Jo appears very upset by her sudden separation from any romantic attachment to Zane, showing just how much she loves him.

It was revealed in "One Small Step..." that Jo had turned down a proposal from Taggart in the post-Founder's Day timeline.

In the graphic novelization "Eureka" written by Andrew Cosby, Jaime Paglia, Brendan Hay, and Diego Bareto, (which seemed to take place sometime before Zane's arrival in Season 2), the character Eric Brogan, a mysterious man whose body contained nanites, was revealed to be a former Army Ranger who served with Jo in Afghanistan, as well as her ex-boyfriend.

In the series finale, "Just Another Day," Jo proposes to Zane and he accepts, leaving the two of them engaged at the end of the series. 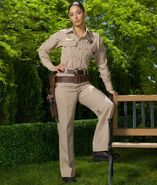