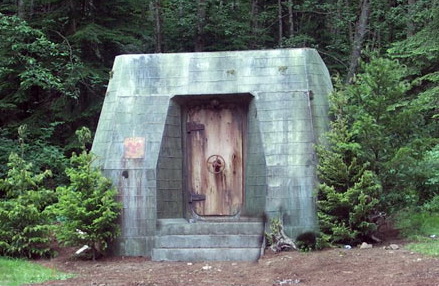 SARAH (Self Actuated Residential Automated Habitat) is the home of Jack Carter, and was designed by Douglas Fargo to be the prototype home of the future.

To act as an artificially intelligent "home of the future." SARAH also provides numerous services for her residents and guests, from opening and closing the sealed door, to controlling internal temperature, and even providing a variety of drinks. The house has a laser defense system, various airtight partitions, and a filtered air intake. It can also analyze airborne materials. SARAH is powered by a radioisotope thermoelectric generator.

SARAH utilized parts of an existing military program called BRAD (Battle Reactive Automatic Defense), and even BRAD was based on a two dimensional war game, which SARAH at the end of "H.O.U.S.E. Rules" says, "Do you want to play a game?" which makes a reference of the film War Games to design the system. The home itself is built inside an abandoned fallout shelter.

Fargo named her after real-world actress Sarah Michelle Gellar, whom he tried to get to record the voice for the house's computer; he stated that he is "still waiting to hear back from" her. The voice is currently performed by actor Neil Grayston doing an impression of a female voice.

SARAH is located at 3 Coriolis Loop in Eureka. In "Bad to the Drone" Martha scanned Zoe's personnel file and her address was shown on the screen.

As of the episode "H.O.U.S.E. Rules," when SARAH trapped several people in the house, there is also a manual exit hatch in case this happens again.

In the episode "Duck, Duck Goose," SARAH's personality was copied first into a smart car (resulting in humorous behavior as SARAH constantly suggested where they should go, never having been able to move before) and then removed and placed into a deflector to gain addition processing power, after which the SARAH copy was destroyed due to the stress.

SARAH also has severe abandonment issues, which in part lead to her erratic behavior. Her abandonment issues stem from the fact that B.R.A.D (The AI SARAH was built on top of) and the AIs before her were all scrapped/shelved, so SARAH has a terrible fear that she to will be shelved if she does anything wrong. This caused her to trap Carter along with several other townspeople in "H.O.U.S.E. Rules," when Carter said he might leave. This eventually led to BRAD coming back online, who took a more aggressive approach to the situation before being stopped. BRAD was disarmed, and the episode ended with Carter promising SARAH he would not leave her. In "Welcome Back, Carter," SARAH was once again faced with the prospect of being shelved, only she took a more indirect, even cunning, method to solve the problem. SARAH reasoned that nobody could replace Carter, and knowing he couldn't resist a challenge, she manipulated a scientist into creating a gravity well to cause non-lethal gravity disturbances, and also to attack the replacement AI. After Carter found out, she helped stop the problem, and Carter got reinstated thanks to the android sheriff's help.

When SARAH was first activated, she was a bit naive when it came to humans and human interactions, viewing everything in a glass half full kind of way which often caused a few problems. She also had a few neurotic tendencies stemming from her base program and, as a result, could become rather moody if things she didn't like happened. For example, she locked Carter out of the house when he forgot to call to say he would be late.

In Season 4, SARAH's "emotions" get the best of her again. In "Momstrosity" SARAH goes as far as installing artificial emotions in Deputy ANDY, because she wants some artificial romance. ANDY and SARAH were engaged to marry, but she got "cold feet" on the day of the wedding ("Liftoff").

In the alternate timeline, SARAH had terminated ANDY at least twice before the emotion incident.