Zane Donovan makes his first appearance in the Season 2 episode, "E=MC...?". He's been in trouble with the law prior to his life in Eureka (allegedly crashed the New York Stock Exchange and many counts of identity fraud) and is often childish, smug, and sarcastic. Though a bit of a trouble maker, he is actually incredibly intelligent, having been accepted to MIT at 13 (only to be kicked out), then Yale, Columbia, and other top schools, all around the age of 15.

His most notable actions in the series are his assistance in preventing the Big Bang simulator in "E= MC...?" from exploding, as well as preventing a second sun from destroying the town in Season 3's episode "Here Come the Suns". Zane's role in the series increases to a major character by Seasons 3 as his relationship with Jo Lupo progresses as well as with the arrival of Eva Thorne (Season 3), when 'The Fixer' takes a liking to his scientific style and makes him the director of the Consumer Lab, where his goal is to utilize projects in Eureka as products to be sold to the masses. Eva also turned to him in many of her mysterious investigations around Eureka. He also becomes more friendly and relaxed around Carter, Allison Blake, and Co., a drastic change from his original behavior.

In the fourth season, Zane seems to regress behavior-wise, presenting the same snarky, sarcastic "bad boy" attitude he displayed when he first arrived in Eureka. It is also revealed that he was never made director of the consumer lab, but was instead penalized by that timeline's Fargo due to their friction, and instead works in the NOLWEPS lab with Dr. Parrish ("All the Rage"). He is slowly assuming most of his previous characteristics, even showing some empathy toward Deputy Andy ("Momstrosity") by leaving the emotional upgrades S.A.R.A.H gave him so he and the smart house could maintain a romantic relationship.

Not much is revealed about Zane's personal life in the show beyond his romantic relationship with Jo Lupo and his seemingly unwavering affection for his mother. At the end of his debut episode, "E = MC...?", it is revealed that the money he stole at the beginning of the episode and transferred to a new bank account was meant as an anonymous donation for an old teacher who'd nominated him for a prestigious award as a teenager in college. In the Eureka novel "Substitution Method", a picture of himself, his parents, and several other siblings (an exact number is not given, just the presence of more than three others) is found stashed in his sock drawer.

It is also revealed that he has had numerous ex-girlfriends, each of whom "went supernova" when he broke up with them. Also in his debut episode, Zane displays flirtatious behavior toward Jo, going so far as to buy her around fourteen boxes of Liza's Lingerie in order to get under her skin. By the end of the episode, he is seen to be unduly focused on her in Cafe Diem, grinning when Carter suggests taking her to the ballet as a first date option. Zane and Jo's relationship is filled with ups and downs throughout the series, mainly due to Jo's doubts about her intelligence when compared to his, as well as his reluctance to commit, problems that slowly become irrelevant at the end of the third season and the first part of Season 4, episode 1, when he proposes to her.

However, all of this seems to become irrelevant with the start of Season 4, when it is revealed Zane and Jo never dated in the new alternate timeline and he's still the same old trouble maker he was when he first came to Eureka. Zane seems to recognize Jo's changed attitude towards him when she defends him from being arrested ("The Story of O2") and aspects of the old Zane's personality occasionally make an appearance.

In "Stoned" it's revealed that Zane seems to be starting a relationship with Zoe Carter after helping her with a project about a month before (much to Jo's dismay, though this version of Zoe had no idea of Jo's feelings towards Zane). In the episode, "The Ex-Files", Zane hints to Jo that he is only dating Zoe to get back at Carter, though this is later revealed to have been a hallucination of Zane experienced by Jo. During the same episode, in an attempt to banish the hallucination, she finally returns Zane's ring, and he asks her, "Why do you have my grandmother's ring?" Zane then seems to realize that something had gone on with him and Jo, though his attempts in the mid-season finale "I'll Be Seeing You" do not elicit a response from Jo, who is convinced that she has to move on. He finally confronts her and asks her what she meant to him. She replies nothing, though Zane is unconvinced. He kisses her and then asks her why it didn't feel like a first kiss, but Zoe walks in before Jo responds. Zoe then asks Jo to celebrate with her and Zane. Jo refuses and leaves.

In the beginning of the second half of season four "Liftoff", however, Zane continues to pursue the information, feeling that Jo is hiding something from him, though she continues to refuse to answer his questions. When Zane and Fargo are launched into space, he confronts Fargo for the details of his and Jo's relationship, which Fargo finally answers. In the episode "Reprise," both Zane and Fargo imply to Jo that Zane is aware of the previous timeline and his relationship with Jo. Armed with the truth, Zane begins pursuing Jo in earnest, wanting to know and experience what he and Jo used to be with each other but Jo continues to stonewall him, not willing to go through all of it again. Zane argues that if they meant something to one another before then maybe they're still meant to be together and kisses her.

In "Glimpse," it is revealed that Zane and Jo are now sleeping together, though Jo later assures Carter (whose house she is staying at after Zane burnt hers down due to neuro-linguistic programming embedded in the song "") that this has only been going on for "five or six weeks" and that she is putting an end to it. After Jo begins training Zane for the Astraeus mission, he attempts to convince her to apply, wanting to take the trip with her. She ends up not going, however, despite his interventions during one of the Astraeus preparation tests. In "Lost," four years after the Astraeus crew returns, Zane finds out Jo has now begun dating Carter in his absence and both of them are shown to have been raising Allison's two kids together. He reverts to petty behavior in his jealousy, snipping at Carter constantly and telling Allison several times Jo and Carter make him sick. This is later revealed to be nothing more than a simulation to keep Zane and the rest of the crew busy after being kidnapped by Beverly and Senator Wen.

In "Force Quit", with Beverly's, Carter's, and Henry's aid, the crew is finally freed and Jo reunites with Zane, though Zane still has some issues with Carter and Jo as a result of the fake-Carter's relationship with the fake-Jo in the simulation. In the series finale, "Just Another Day," Jo proposes to Zane and he accepts, leaving the two of them engaged at the end of the series. 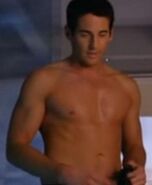